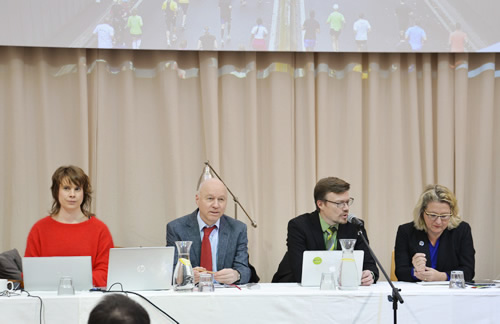 On 18 November 2019 the Annual Conference of the European Environmental Bureau took place in Berlin, where key players from the European environmental movement met with political decision-makers. The focus was on the upcoming EU presidency and its strong commitment to the environment expressed in the Green Deal.

The EEB, the European Environmental Bureau, is the largest network of environmental citizens’ organisations in Europe. It involves many NGOs from EU member states and some accession countries, together with networks of cooperation. Due to its long tradition and internal democratic mechanisms, it provides a floor for environmental citizens’ groups to express their standpoints and to jointly advocate for progressive policies in the EU and globally.

The EEB Annual Conference was, similar to previous years, concerned with EU policies: this time with a focus on the upcoming EU presidency and its strong commitment to the environment expressed in the Green Deal (first EU strategy priority for 2019-2024). Key players from the European environmental movement met with political decision-makers to discuss these plans – official European Commission representatives and national politicians, namely from the EU’s rotating presidency countries (Finland in 2019, Germany in 2020) were available for dialogue. The exchange was sharp and fruitful – the green movement has a strong voice as it has been mobilized over the past weeks and has gained considerable support from the general public. It is becoming an increasingly important stakeholder to convey necessary changes in society, compared with other actors – even if the European Union has made considerable progress in developing environmental laws and protections, actions by governments and businesses lag well behind what science demands.

The conference was attended by Jana Dlouhá (as a representative of the Green circle association) and Jiří Dlouhý (representing Society for Sustainable Living). For more details please visit the EEB annual conference website or see the report from the 2019 Conference (upcoming).